Light blond of hair and sea-blue of eye, this young Midlander woman carries about her a furtive, abashed air, as if she cannot wait to make herself scarce at any given moment. Most folk would guess her to be in her early twenties.

A pair of spectacles perches comfortably on her nose. Under the shadow of old dirt that mars her face like a birthmark, her pale, unscarred skin suggests unfamiliarity with combat; the sole exception, if one were to look closely, is some calluses on her fingertips which indicate close acquaintance with manual labor. 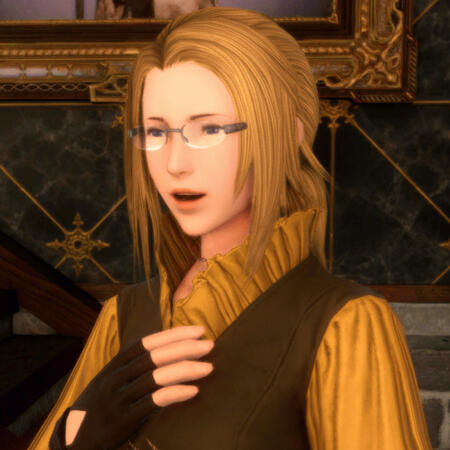 Tales from the trail:
Before her current tenure as a logistics officer for Gridania-based artisans' guild Maker's Mark, Cordelia earned a living on the caravan trail as a guard and scout, as well as a courier for deliveries folk don't want to risk the postmoogles messing around with. (Yes, that's canon!) She is always happy to swap a tale or two from the roads.

Firearms:
Having no formal training with the carbine she is seldom seen without, Cordelia is always interested in learning how to better maintain and use it from more experienced gunners. The same interest extends to Bozjan gunblades.

Ishgard:
Cordelia can often be found visiting the Brume, the Skysteel Manufactory and other locales in the Holy See. News of goings-on within the city may interest her.

Voidsent:
Any mention of voidsent, particularly on how to vanquish them, is certain to pique Cordelia's attention.

Dalmasca and Ivalice:
You will find an eager ear in Cordelia if you hail from Dalmasca, or have lore or curios from that land to peddle - particularly if they concern old Ivalice.

Time as a caravan guard has given Cordelia some familiarity with sword, spear and bow - but none of these rival her natural affinity for firearms. Her aim rivals that of any Lominsan musketeer or Ishgardian machinist.

The caravan trail is a dangerous road, where every caravan hand and guard with a talent for moving silently must serve as pathfinders and lookouts. Years of such experience have made Cordelia adept at evading detection.

Cordelia has worked on caravans of varying sizes and sophistication over the years, giving her some know-how on organizing and guiding supply trains - enough to run her own in support of small field expeditions.

Cordelia can often be found leafing through this tattered journal, a family heirloom containing a wealth of hand-copied records concerning her family history. It follows her wherever she goes in a waterproof pouch.

A standard machinist's carbine, its faded wood parts suggesting origins in an early Manufactory production batch. Chambered for steel slugs, fire-aspected rounds and others, it is Cordelia's preferred weapon.

Reverse-engineered from a Bozjan gunblade, this weapon bears the maker's mark of the Manufactory. Cordelia uses it mainly as a shield in times of great danger, counting on its defensive cartridges to keep her alive.

An old Garlean-style six-shooter with a barrel of high steel, restored by artificer Garrett Sadova for 25,000 gil. Cordelia swaps her treasured carbine out for it in situations where intense close-in fighting is expected. 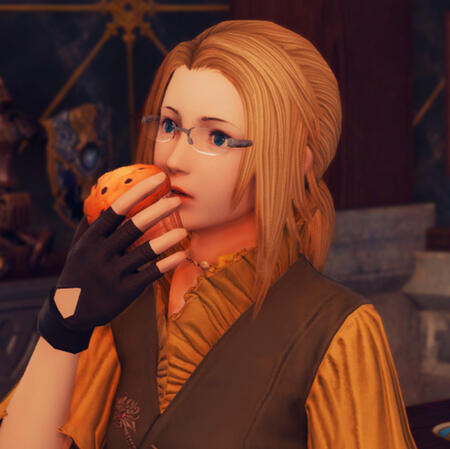 Timezone:
GMT+8 (or exactly half a day ahead of EST, if you like).

Where I RP:
In-game only. IC when the RP tag is on.

Above all, I am looking for:
Stable long-term RP connections with characters I can get to know, and grow Cordelia with, over time. It's hard to do that when I can't even be sure if a character will be the same race - or even be active at all - next month. If you prefer to switch it up regularly with lots of alts and/or Fantasias, I am probably not the right RP partner for you.

The following is a selection of records of Cordelia's involvement in player-run RP plots that have influenced her journey as a character in some way.

All information on this page may be treated as IC, though not necessarily public knowledge. Feel free to inquire if you would like to reference any of it in RP!

Investigating a mass outbreak of ashkin throughout the Black Shroud, the Oasis adventuring company came into conflict with Martelle Saint-Delais, a nationalist Duskwight noblewoman who had struck a devil’s bargain with voidsent to resurrect the ancient nation of Gelmorra - beginning with evicting the unliving denizens of the Palace of the Dead.

Informed by Oasis sellsword Rabia Moore, an old acquaintance from the caravans, Cordelia lent her carbine to the defense of the South Shroud alongside her then-boss, Saoirse Quincy, and a now-vanished associate, Gridanian lancer Allen Vorshaire. The trio helped the local Wood Wailers defend Buscarron’s Druthers from the ashkin prowling the forest, and eventually took the fight to Lady Martelle’s voidsent allies in the depths of Amdapor Keep. These efforts helped pave the way for Oasis forays into the Palace of the Dead, and marked Cordelia’s first outing as an adventurer proper.

When an Oasis airship carrying valuable magitek cargo went down over Coerthas, the adventuring company found itself contending with the most unlikely looters ever: a pack of feather-obsessed, chimerical ‘flesh mammets’. Events reached a head when the diminutive creatures maimed one of the crash site investigators, geomancer Teresa Himura, and made off with one of her red eyes. Cordelia joined the Oasis team as they sought information on this strange new menace from Ishgard to Ehcatl.

Upon discovering these ‘Frazels’ were the creations of Lazel Nacatl, a mad Ixal chimerologist who had promised them wings of their own for bringing him the Royal Eye of Allag, Oasis set out to hunt him down in an Allagan ruin network beneath Coerthas. As the only contractor on the expedition, Cordelia followed the team for days of meandering, eventful underground travel before locating Lazel’s cathedral-like sanctum. Armed with an unstable, flame-spewing Allagan firearm she had salvaged during the journey, she joined the ensuing battle with the murderous Ixal and helped vanquish him, freeing the Frazels from his tyranny and winning vengeance for Teresa.

Taking a break from the caravan trail, Cordelia signed on with the Firmament Resource Initiative, a venture founded to support Ishgard's Restoration through the establishment of logging operations in the Coerthas Central Lowlands. There, while helping to deal with a coven of witches that opposed the initiative, she was reunited with a childhood family friend: her 'Auntie Aurielle', who had become one of the coven's elders.

After relations with these so-called 'Daughters of Halone' were resolved, the aged Elezen presented Cordelia with a priceless gift: an old journal belonging to the caravanner's late father. Within its tattered pages she found records copied from generations of family diaries, suggesting that her ancestors were not native to Coerthas, but had migrated from ancient Ivalice in the wake of the War of the Lions. This discovery instilled in Cordelia a newfound appreciation of Dalmasca and its history, people and culture - as well as a longing to distance herself from her troubled origins in Ishgard by embracing an older heritage.

During her tenure with Ul'dah-based caravan company Secret Star Services, Cordelia led a search for a lost convoy in Raincatcher Gully alongside future guildmates Castle Stoneforge and Namida Wyrmsong. Discovering evidence of unusually well-armed bandits preying on the caravan route between Wineport and Red Rooster Stead, the trio joined a company delegation to Limsa's Coral Tower, which secured official clearance for an armed reprisal on Lominsan soil - along with Maelstrom and Yellowjacket support with Singing Storm as liaison.

Interrogation of a captured Secret Star traitor revealed that the bandits were led by a Garlean beastmaster, Saltu pyr Rex, come from the Bozjan front to turn the Gully into a recruiting ground for the IVth Legion. Cordelia provided fire support for Secret Star’s subsequent assault on Rex’s camp near Brayflox’s Longstop, involving a decoy caravan for bait followed by a counterattack alongside the Limsan soldiers. After a furious battle, the thwarted Rex retreated back to Bozja on his pet dragon, restoring peace to the Gully and marking an end to Cordelia’s first taste of jungle warfare.